THE QUERCUS ALBA OAK DOMINATES FORESTS THROUGHOUT MOST OF THE EASTERN UNITED STATES.

American White Oak stretches from Texas to Maine, and from Minnesota to Florida, as well as reaching across borders into Canada and Mexico. American oak barrel-making was oriented primarily to bourbon and whiskey distilleries until the early 1980s, when American-produced oak barrels began to be used for winemaking. Over the last two decades the quality of these barrels has improved radically. Following Prohibition, and until the early 1980s, some whiskey barrels were adapted to wine production by steam bending and not charring the barrel interior. In the early 1980s, Nadalié USA developed seasoning and production techniques for American oak that other cooperages would quickly adopt, leading the accelerated evolution of the American-made wine barrel.

Our wood is sourced mainly from Western Pennsylvania. The dominant species sourced for Nadalié barrels is White Oak (Quercus alba).

These forests are in the foothills of the Appalachian Mountains. Logs are sourced primarily from Virginia and occasionally from West Virginia and Maryland. The species are dominated by White Oak (Quercus alba).

THE MOST COMMON OAK IN FRANCE, AS THROUGHOUT THE REST OF EUROPE,
IS THE QUERCUS ROBUR SPECIES.

France is the dominant source of European oak for staves. The vast forests that cover more than 20% of the country produce oak of a quality that is highly sought-after in barrel-making. The most common oak in France, as throughout the rest of Europe, is the Quercus robur species (also known by the designation of Quercus pedunculata and Quercus rubra), which flourishes in a variety of growing conditions. Another important though less common species of oak in French forests is Quercus petraea (also known as Quercus sessiliflora, Quercus sessiflora, and Quercus sessilis), which has a tighter grain.

Nadalié produces barrels from oak originating in the Nevers, Allier, Tronçais, Centre, Vosges, and Limousin forests, as well as other, smaller forests. Forest of origin is a significant factor in the choice of oak in that the terroir and climate of a given region affect, among other things, the density of grain in the wood. A tighter grain not only means a less porous wood, which ensures a watertight barrel but also releases oak flavor to the wine more slowly. By contrast, tough, coarse, loosely-grained wood, such as oak from Limousin, imparts strong flavors more aggressively and is typically used for Spirits. 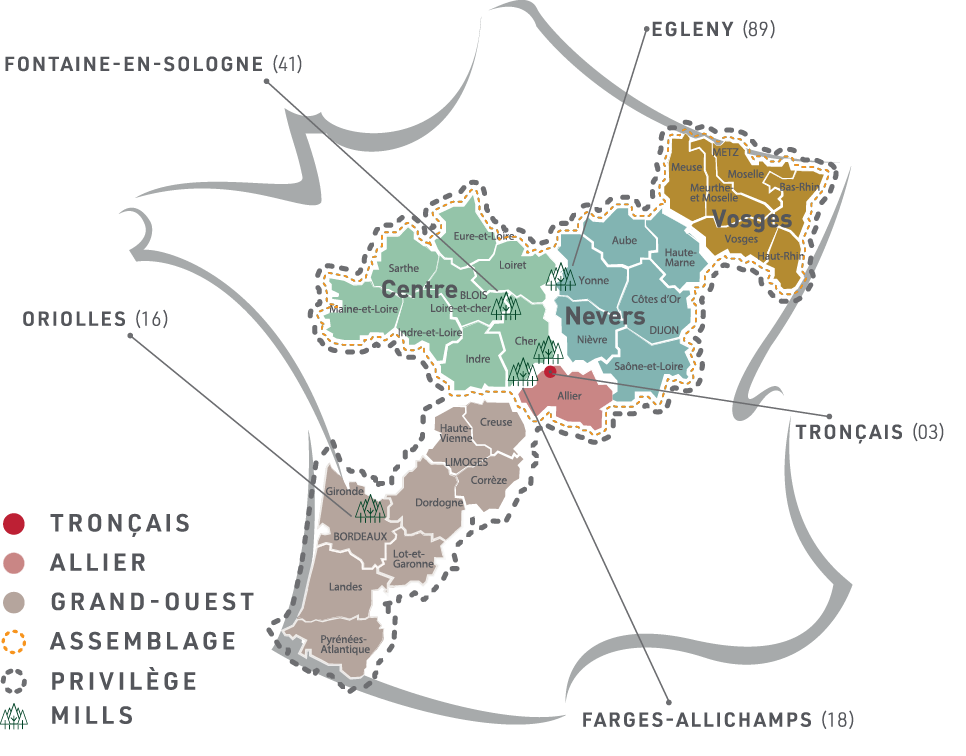 EUROPEAN BARRELS COOPERED IN THE NAPA VALLEY SINCE 1980

Quercus petraea is a slow growing oak native to most of Europe. The slow growth creates medium to fine/tight grains. Our oak is sourced from Slavonia, a historical region of Croatia and Western Hungary.